I was standing in the supermarket when the realization hit me: I’ve turned into a French person. I was in the cheese aisle, in the camembert section. While internally grumbling about the proliferation of pasteurized camembert (sacrilege!), I scanned the choices and zoned in on a brand I liked (most supermarkets carry upwards of 20 different brands). Then, without really realizing what I was doing, I rolled up my sleeves and got down to the work at hand: finding the best camembert of the lot.

Unlike many hard-rind cheeses, like gruyère or comté, where all the slices in front of you are likely coming from the same enormous wheel, camembert is a whole different story. A soft-rind cheese, ladled into individual circular moulds, and sold in thin wooden boxes, camembert is all about ripeness. Ask a French person how they like their camembert and they will not mince their words. 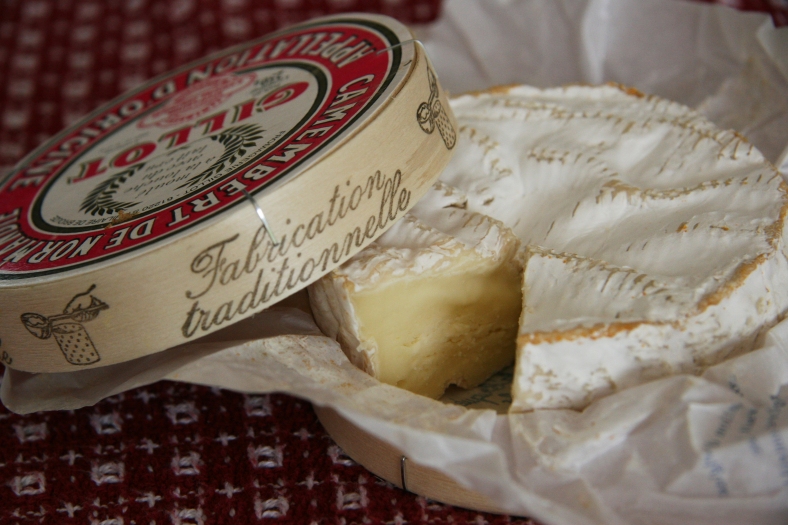 I collected some spontaneous answers to that question. Many of the texts I received included exclamation points, as evidenced below. Not a neutral subject! Here’s a sampling of these French people’s preferred camembert qualities:

One friend became dreamily inspired by the question, responding: “I like it tender. Slightly firm in the center (4 mm) and with a pronounced flavor. But not too too strong either…The bread I’d want to accompany it would be organic, farmhouse bread, nice and crusty, almost burnt…..”

You’ll find hardcore fans of a drier, “chalky” texture, those who go for deep, almost liquefied ripeness, and those who prefer something in the middle. Not too hard, not too soft. Just right. Personally, I’ve never met a camembert that was too soft. The riper, the better.

But how, you may ask, can you tell, if it’s all wrapped up in a wooden box, and stacked on the shelves of the cheese cooler?

Well that’s where my rolled-up sleeves come (back) in. In France, I learned one day long ago while innocently going about my grocery shopping, it is customary to partially undress the camembert in the store. In fact, it is not at all infrequent, if you stand in the cheese aisle for a while, to observe shoppers undressing 5, 10, or more different camemberts, in search of the fromage parfait.

Once you’ve removed the top, just a layer of wax paper remains between you and your potentially ideal cheese. Holding it in your left hand if you’re right-handed, you now begin, with your right thumb, applying pressure to the center of the disc. Your thumb, with a little practice, magically sends information to your brain, based on the resistance it encounters. You have to factor in the chilliness of the refrigerated display case, of course. Not ideal conditions for these delicate cheeses!

High resistance under your thumb indicates something  younger and dryer, you may be robbing the cradle, unless you’re partial to ‘chalk’ or ‘plaster’ in your camembert.

Low resistance (harder to find, in my experience) means the cheese has been ripening and may be close to runny—”too ripe” for many, heaven for others. 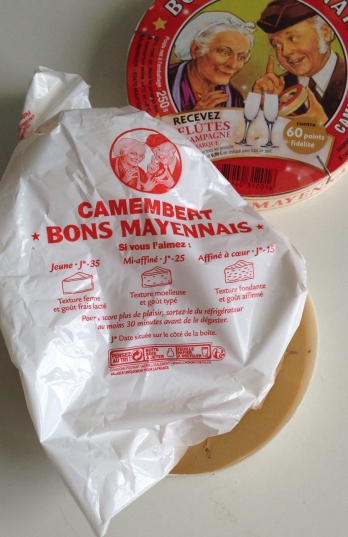 Some brands offer guidance on that wax wrapper, knowing that millions of shoppers will be removing the lid to have their thumbs take better measure than their eyes could.

It is suggested that if the cheese is due to arrive at the “use by” date in 35 or more days, it is young and may be lacking in character.

25 days to the big day and it should be softening up to the touch, gaining in ripeness.

If you’re 15 days away or even less than that, prepare your bib, and a spoon.

The gravity of this decision, made thousands of times each day by French people, can not be underestimated. A quick search of the internet (“How to choose a camembert?”) turned up 417,000 responses. Women’s magazines seem to have taken the topic quite seriously, offering tutorials on all of the key aspects one should keep in mind while fondling rounds of half-dressed stinky cheese in public.

As a popular French recipe-sharing site reminds its readers in all sincerity, choosing camembert is an art!

The French are not the only ones to feel passionate about camembert. Legend has it that Dr. Knirin, a New York doctor, cured his own intestinal woes with a strict diet consisting mostly of camembert. He felt so strongly about camembert that he traveled to Normandy in 1926 to place a wreath of flowers on a statue erected in honor of Marie Harel, a revolutionary-era farmer to whom the invention of camembert has been attributed. In a public speech made in the village of Camembert, Knirin claimed to have successfully treated countless patients, to whom he had prescribed the eating of camembert several times a day.

Camembert —with its many varieties and ubiquitousness—reminds me a bit of our beloved cheddar in the States. But camembert, at least here in Normandy, seems to have made its way into mainstream language in a way that cheddar, to my knowledge, hasn’t.

If you want to tell someone to shut up, you can tell them Ferme ta boite à camembert! or, Shut your camembert box! If you’re playing Trivial Pursuit in France, you’re not winning pieces of the pie, or even the tarte, it’s wedges of camembert you’re collecting. There’s also a funny little thing people say to each other (meaning, approximately, “I’m right, so shut up!”) involving the French onomatopoeia for a squeezing/honking sound: Pouêt Pouêt Camembert! Some French language fanatics on a forum I was reading believe that the expression was born of the connection between the “pouêt pouêt” being the onomatopoeia for the squeeking or honking, which leads us to old-fashioned car horns, which you had to squeeze, and by now you know all about what happens in the supermarket cheese aisle for the whole world to see.

Whether you like it chalky or runny, firm or yielding, melted or raw, on bread or somewhere else, there’s a camembert for everyone. Just don’t forget to squeeze it first. 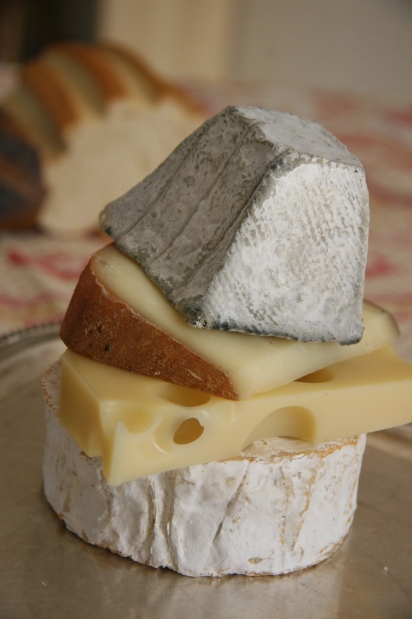 7 thoughts on “Squeeze the Cheese”